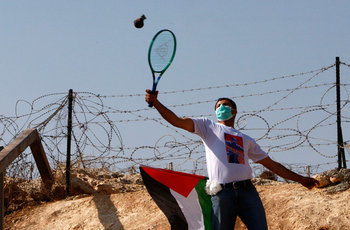 When an armed grenade lands in the general vicinity, there's just enough time for the heroes to pick it up and throw it back (extra points for blowing up the original thrower), pass it to someone else to deal with it (which leads to them realizing they've just been handed a live grenade and try to pass it onto someone else) or, in the more heroic fashion for when the clock is really low, jump on it.

This is, of course, Truth in Television. To avert this trope, the thrower might allow the grenade fuse to 'cook off' a few seconds before throwing. This too can have unpredictable results, as the time it takes for fuses to burn is never consistent.

One possible form of Tennis Boss. When used in Darker and Edgier stories, or when the "hero" happens to be wearing a Red Shirt, it tends to backfire horribly.

Throw back one activated grenade, three more shall take its place.

Throw back one activated grenade, three more shall take its place.