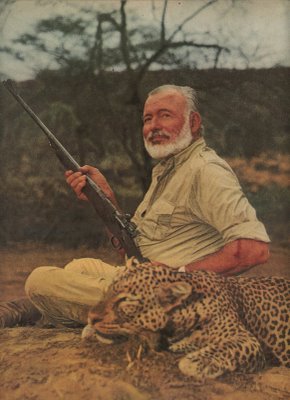 Nobel laureate Ernest Hemingway, pictured here with a leopard that he heroically killed in self-defence because it was coming right at him.
"Peter, if you want me to run your little camping trip, there are two conditions: firstly, I'm in charge, and when I'm not around, Dieter is. All you need to do is sign the checks, tell us we're doing a good job and open your case of scotch when we have a good day. Second condition, my fee. You can keep it. All I want in exchange for my services is the right to hunt one of the Tyrannosaurs. A male, a buck, only. How and why are my business. Now if you don't like either of those two conditions, you're on your own. So go ahead, set up basecamp right here, or in a swamp or in the middle of a Rex nest for all I care. But I've been on too many safaris with rich dentists to listen to any more suicidal ideas. Okay?"
— Roland Tembo, The Lost World: Jurassic Park
Advertisement:

The heroic counterpart to the Egomaniac Hunter and the Evil Poacher, the Great White Hunter is a heroic big game hunter. He is most likely a Gentleman Adventurer, but he could also be an earthier type who leads safaris for a living. Either way, he will be an expert tracker, a crack shot, and skilled at wilderness survival. He may have learned his trade as a Hunter Trapper.

Deliberate Values Dissonance might come up if the story is trying to impart An Aesop about respecting the lives of wild animals. Often, however, this character does admire animals even as he kills them, considering them a Worthy Opponent of sorts. Some may even consider hunting something that doesn't have a chance of fighting back to be unsportsmanlike. Sometimes he does it merely out of necessity: there is a dangerous predator with taste for human flesh at the wild, and native hunters have failed at neutralizing the threat, so he is called to do the job.

The Great White Hunter is something of a Dead Horse Trope. When he still appears, it will be in a period piece or he will be leading expeditions to capture animals alive. Or he might be retired and feeling remorse over the number of now-endangered animals he killed over the course of his life. His spiritual descendants the Safari Guide, Wildlife Conservationist or Game Warden may still appear unironically. May wear an Adventurer Outfit.

Despite his title, not always white... and not always all that great, either.

Has nothing to do with Great White Sharks, though a Great White Hunter might very well hunt them.