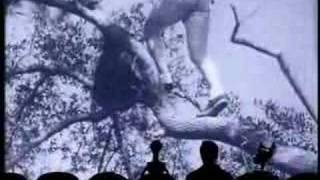 Catching Trouble is a short demonstrating naturalist Ross Allen going out and bullying several animals and then dragging them back to human civilization. When nature tries to protect its animals, it is torn asunder and murdered as well. Meanwhile, narrator Ted Husing makes cracks about the tormented animals like there's no tomorrow. Unlike the Long Weekend, there is a sad ending.