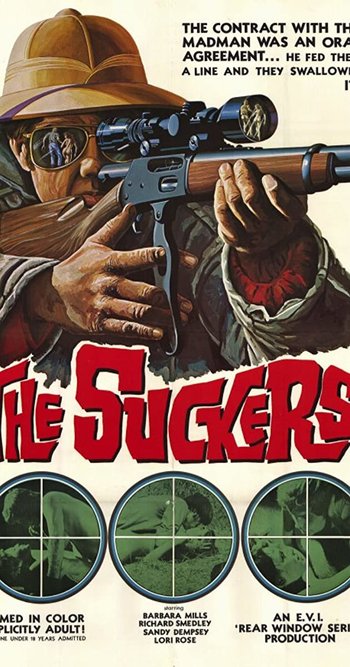 The Suckers is a 1972 American sexploitation film directed by Stu Segall under the pseudonym Arthur Byrd, and written by Ted Paramore (credited as Edward Everett). It is an extremely loose adaptation of the 1924 short story "The Most Dangerous Game" starring Richard Smedley, Lori Rose, Vincent Stevens, Sandy Dempsey, Barbara Mills, and Norman Fields.

Steve Vandemeer, a rich and powerful big-game hunter, tires of tracking and killing animals, and gets an idea— he will invite the owners of a model agency he knows and two of their models to be guests on his estate for the weekend, and use them as the objects of his latest hunt. To make the hunt more 'sporting', he also invites a fellow big-game hunter Jeff Baxter, and adds him to the 'prey' to even up the odds.

Tropes in The Suckers: