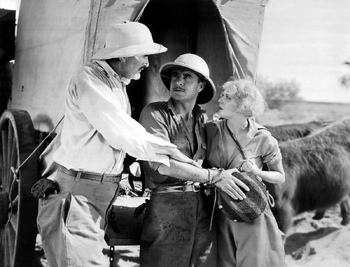 Desert Nights is a 1929 film directed by William Nigh, starring John Gilbert.

Hugh Rand (Gilbert) is the manager of a diamond mine somewhere in South Africa. He receives word via telegram that an English aristocrat, Lord Stonehill, and his daughter Diana are visiting as part of a safari expedition that will also include a big game hunt. Hugh guesses that Diana will be a stony-faced old maid but is pleased when she turns out to be a ravishing blonde (played by Mary Nolan). Hugh is charmed and starts putting the moves on her right away.

Hugh is in the middle of showing his guests the vault with the uncut diamonds when he receives word that Lord Stonehill has been delayed. It turns out that "Lord Stonehill" is an impostor named Steve, and he and Mary are jewel thieves. Steve, Diana, and their fellow accomplices in the fake safari expedition pull out some heavy weaponry and make their way out of the diamond camp, kidnapping Steve in the process. However, their escape through the Kalahari (here spelled "Calahari") Desert proves unexpectedly difficult, and the power dynamics in the trio start to shift as Steve, Diana, and Hugh battle for their lives.

Desert Nights is a silent film, one of the last silent films made by MGM, which had been reluctant to make the switch to talkies and was still producing silents in 1929 over a year after every other studio had made the change. It was the last silent film for John Gilbert, now remembered as one of the most tragic victims of the talkie revolution. His career swiftly collapsed and never recovered.