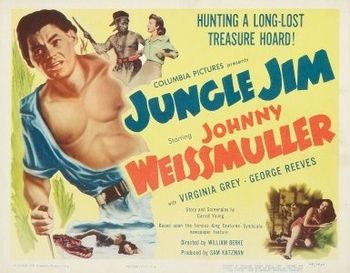 A lobby card for the first film.
Advertisement:

Jungle Jim is the fictional hero of a series of jungle adventures in various media. The series began in 1934 as an American newspaper comic strip chronicling the adventures of Asia-based hunter Jim Bradley, who was nicknamed Jungle Jim. There were also radio, film, and television adaptations.

The comic's early years generally featured stories revolving around pirates, slave traders and other common jungle invaders. As World War II approached, Jungle Jim, like many other American comics, developed a wartime theme, in which Jim fought the Japanese, and it moved from its position as a topper strip to its own independent Sunday page. The strip ended in 1954.

There was also a radio series, The Adventures of Jungle Jim, that premiered in 1935. A 12-part film serial was made in 1937 with Grant Withers as Jungle Jim.

However, probably the most famous incarnation of Jungle Jim to modern audiences is the series of 16 Jungle Jim films made by Columbia Pictures between 1948 and 1955, starring Johnny Weissmuller (a former big-screen Tarzan) as Jim. Weissmuller also starred as Jim in the single-season TV series that ran in 1955-56. He had a comicbook revival in 2015 as part of the King/Dynamite series of miniseries. Fittingly, his miniseries sees him relocated to Arboria by earlier events in the series.