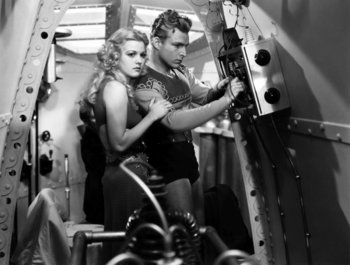 Flash Gordon (Larry ‘Buster’ Crabbe) and Dale Arden (Jean Rogers) in the original 1936 serial.
In the 1930s and 1940s, three film serials were made based on the Flash Gordon comic strip. They starred Buster Crabbe as Flash Gordon, Charles Middleton as Ming the Merciless, Jean Rogers as Dale Arden, and Frank Shannon as Dr Hans Zarkov.
Advertisement:

The three serials were:

The serials were syndicated on US television during the 1950s, under the title Space Soldiers to distinguish them from the 1954 Flash Gordon TV series starring Steve Holland.

These serials were among those that influenced the style of the Star Wars movies, particularly their use of an Opening Scroll.