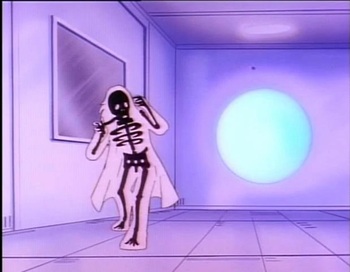 Spock: An entrance, Captain, but no exit. They go in, but they do not come out.
Kirk: A disintegration machine.
— Star Trek: The Original Series, "A Taste of Armageddon"
Advertisement:

In some settings, such a device may also be used for dystopian Population Control, or perhaps as a means of suicide or euthanasia, but science fiction Disintegration Chambers aren't like some scarily-named but ultimately harmless real-world scientific apparatuses—science fiction Disintegration Chambers are used to kill people. Murder by Cremation can also resemble this in settings where it's used to formally execute people (and isn't just a matter of a private murderer disposing of a body), but a Disintegration Chamber is more likely to be depicted as a genuinely "clean" and scientific method of eliminating people, without the overtones of Cold-Blooded Torture (although, depending on the writer, execution by disintegration may also be portrayed as slow and painful).

A Sister Trope of Disintegrator Ray; the distinguishing factors being that the "disintegration" is explicitly a form of execution (whether by a tyrannical regime or after some kind of due process) and does not happen as a result of the victim being shot with some kind of hand-held Ray Gun. Compare Gas Chamber.