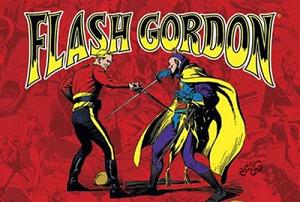 Flash Gordon is a classic science fiction comic first written and drawn by Alex Raymond in 1934 and published by King Features Syndicate. It tells the story of Flash Gordon, an athlete who travels with reporter Dale Arden and Dr Hans Zarkov in a rocket Zarkov built to the planet Mongo, ruled by Ming the Merciless (Fu Manchu IN SPACE). Flash sets to incite revolution. But wait! Dale is in love with him, and so is Princess Aura! They are aided by Prince Barin of Arboria, Prince Vultan of the Hawkmen and Queen Desira of Tropica. Later stories featured Flash and company traveling to other planets, but the Mongo story arc is by far the most famous.

Although originally a comic strip, the franchise now extends across multiple media.

Trope codifier for Space Opera (although the original lengthy Planet Mongo arc, which is the only storyline most modern fans are familiar with, is more of a Planetary Romance) and Raygun Gothic, along with Buck Rogers of course.