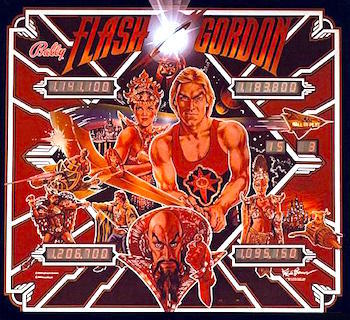 Flash Gordon is a Pinball game from Bally/Midway, based on the Cult Classic 1980 movie from Dino De Laurentiis. It was designed by Claude Fernandez and illustrated by Kevin O'Connor.

The player is Flash Gordon, savior of the universe, out to stop Ming the Merciless and his army from conquering Earth. Launch into the royal chambers on the upper layer and attack the palace guards, then drop down to fight the armies of Mingo City on the lower level. Travel to Arboria and try the challenge of the Wood Beast to impress Prince Barin, rally Vultan and the Hawkmen to collect the Super Ring bonus, then vault back up to Ming's throne for 15 seconds to multiply your scores.

Riding on the coattails of the movie, ten thousand Flash Gordon tables were made, becoming Bally's best-selling game of 1980. It is highly regarded by pinball die-hards for its challenging gameplay, intricately beautiful artwork, and impressive use of realistic voices. The game is infamous for its Nintendo Hard gameplay, with midfield pop bumpers and drain-hungry outlanes ready to punish the careless — this is not a game that you can lose yourself in, but a series of controlled explosions that fights back with every shot.