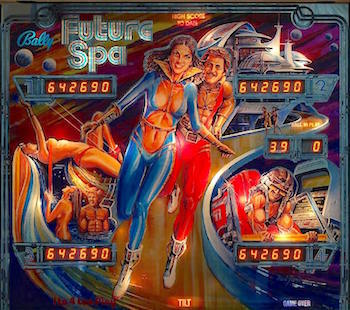 Welcome to The Future, and welcome to the Future Spa! Our facilities have been designed to maximize your Pinball playing while sculpting your body to perfection. Use the gate to redirect the soothing waters away from the outlane, then enable the Fountain of Youth for a bonus, super bonus, and Special. Knock down the four inline drops and expose the Futurity Target, somersault over the Rollover Button for the Saucer Bonus, then swim upstream with our bathing beauties for another workout.

Excuse Plot aside, Future Spa is a 1979 pinball machine designed by George Christian with artwork by Dave Christensen and Paul Faris. As a game, it's fun but largely forgettable; even with a variety of targets to shoot for, much of the widebody space comes across as wasted, and poorly-maintained tables end up feeling sluggish. Even so, the game is infamous among pinheads as an endless font of humor — between its Seventies-era aesthetics, laughably dated Raygun Gothic portrayal of the future, and the sheer cheesiness of the premise itself, Future Spa is a game that will long live in the annals of pinball history for all the wrong reasons.