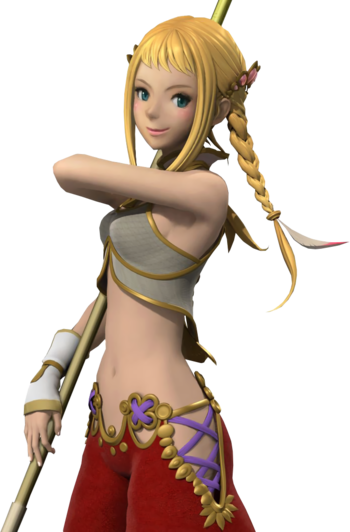 No support needed for Penelo.
Advertisement:

When a character's costume doesn't include underclothes; their bra, panties, or both, seem to be AWOL. They're usually female, but the trope isn't gender exclusive. The outer clothing may be made from a translucent material (with strategically placed lace or tape for modesty), feature a window to show off some Absolute Cleavage or Underboobs, or may be something backless, but whatever the case, it's obvious that the outside costume is all that the person is wearing. If she's wearing any underclothes at all, they must be made of air - or, should we say, Vapor Wear.

Of course this is often Truth in Television, perhaps as a way of being daring or flaunting convention. Today, it's common among celebrities and in runway fashion. During the 1970's the look was even a part of mainstream street fashion (the more obvious a woman's lack of a bra was, the better).

This trope can also apply to male characters, but rarely does, because nipple nubs tend to be more socially acceptable than a certain bulge. If something should be there but isn't, it's probably thanks to Barbie Doll Anatomy (common in most forms of animation), as well as a sign you might be overthinking things.

The trope is common in Science Fiction and Fantasy, regardless of the medium, perhaps because it's easier to insert fetishes in an invented world than in the real world. It is also common in Historical Fiction (but more often than not this is not historically correct — most people did wear underwear even in ancient times, though it may not have looked like what is worn today).

This is occasionally known as "itenai" (a shortened form of 履いてない: "haitenai", which means "not wearing (over legs/hips)") in Japan, especially when the question "is she or isn't she wearing them" is left deliberately ambiguous.

Since the 1990's the trope is quite commonly inverted, with people wearing skimpy or see-through clothing to show off the undergarments beneath. Interestingly enough, the effect is more or less the same as playing the trope straight: titillation by showing what is not supposed to be seen.

Not to be confused with Censor Steam, Vaporware, or Vaporwave, nor with the similarly named Real Life clothing company that, alas, bears absolutely no relation to this trope. For a more generalized version see Going Commando (which means just not wearing underwear, without necessarily being obvious about it).