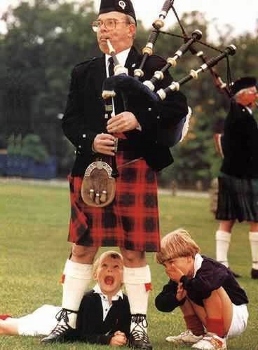 Simply put, a character isn't wearing underwear for some reason. According to The Other Wiki, "'Going commando' is reputed to have begun with commando and other special forces military units, in which some soldiers stopped wearing underwear to prevent chafing.

When a male does it, it's generally played for humor, squick, arousal or if he's wearing a kilt, in which it's known as "Going Regimental". When a female does it, it's usually treated as fetish material, though it might be Played for Laughs as well. Going braless, in general, is a different story ("going commando" means no underpants) — that said, bralessness can be played for the same purposes, and is included in the examples on this page. Lack of underwear may also be averted or lampshaded in the case of a Half-Dressed Cartoon Animal of either sex.

If it is obvious that a character is Going Commando and/or it is played for Fanservice purposes, it is Vapor Wear.

Compare Naked in Mink, Diamonds in the Buff, Full-Frontal Assault (for when the fighter decides to forgo more than his boxers).

Other names for Going Commando can be identically separate in these variations as well, e.g. "Free(-)balling" is for Males and "Free(-)buffing" is for Females.