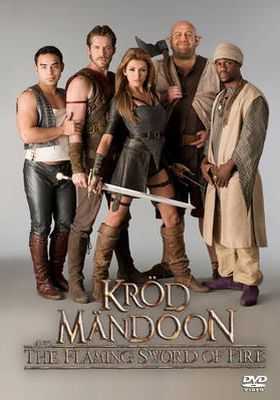 Kröd Mändoon and the Flaming Sword of Fire (properly "Kröd Mändoon," not "Krod Mandoon.") is exactly what you think it's about. Yes, The Hero is named Kröd Mändoon, and he has a flaming sword of fire. Creator, developer, and writer Peter Knight said that its humour is influenced by The Simpsons, Get Smart, and Monty Python and the Holy Grail. It aired in 2009.
Advertisement:

The series is mostly a parody of Heroic Fantasy. The basic plot is that Kröd is the leader of a band of good rebels fighting against an evil dictator named Dongalor, but within that simple premise is a bunch of subplots and character-driven humor.

Kröd Mändoon and the Flaming Sword of Fire provides examples of: