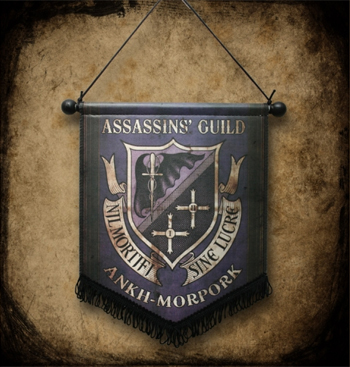 In various forms of fiction, it is terribly common to have various criminal organizations floating around with a single purpose in life: causing death to others. It is often called The Assassin's Guild, but it could appear under any number of other names or in any number of settings. Their goals for this vary. It's often simply for money, but it could just be a group that enjoys playing politics. In that case, there's some overlap with the Ancient Conspiracy, except they're not that old ... and not that big.

Sometimes, Murder, Inc. started as an organized crime group that came under new leadership and started indulging in other, darker (and probably less profitable) hobbies, such as the killing of puppies. In that case, they probably go by a modern, Mafia-esque name. Frequently and regardless of origin, they have a large code of by-laws that makes one wonder how they do anything without six months' advance notice.

Indeed, there's often overlap between Murder, Inc. and other groups. Often, what makes Murder, Inc. different from any other Organized Crime Syndicate/terrorist front/Secret Police is the fact that their strength comes not from their numbers or their training, but their reputation. Most such groups could, in fact, really consist of ten competent people and it wouldn't hinder their operations too much. Or two—don't forget the Old Firm. They're feared as the ones that "take people" who are "never seen again." Usually people that "cause problems" that need to be "solved." Capisce?

In less contemporary settings—far past or far future—they are the frequent source of Training from Hell (and, if their membership is large enough, The Spartan Way).

In some cases, Murder, Inc. might even be a force that will assist the heroes. But they should never be trusted. It's kind of like trying to beat someone to death with a rattlesnake; deadly, effective, and very, very stupid. However, if a single character leaves this group, they will be your friend forevermore, possibly becoming the Sixth Ranger.

There are more pragmatic evils out there. Why kill people when you could be doing something else? Why, for fun and profit, of course! "For fun" usually entails that the group sees murder as an art form of one sort or another (like the Blood Knight you never see coming). "For profit" usually invokes images of the League of Extraordinary Hitmen (tm). Sometimes, what keeps such a group together is a slavish devotion to their leader, who will serve as The Dragon. First glance would indicate Murder, Inc.'s leader would be a good Man Behind the Man. Unfortunately, The Reveal is usually too foreshadowed to be useful: after all, if every person on the street fears them, it's not surprising when they turn out to be the Big Bad. One can still play it that way, but don't expect the audience to be surprised.

These groups are typically composed of Professional Killers unless this trope is being played for laughs. More comedic examples often operate like a Weird Trade Union. May be either A Lighter Shade of Grey or darker.

The Trope Namer is Murder, Inc

, a gang that mainly did killings for Lepke Buchalter and the National Crime Syndicate from the 1920s through the 1940s, dubbed Murder Incorporated by journalists, aka the Brownsville Boys. They also hired their men out to other mobs. What set them apart was, unlike hitmen who worked on a per-contract basis, they were salaried and had a benefits package.

Please note that Murder, Inc. isn't always evil. They don't tend to let codes of morality get in the way of their business model.note (Sometimes...)

Compare with Private Military Contractors, which has similar functions with employees acting as Hired Guns, but is often "legal" compared to the criminal Murder, Inc. (not that they're above engaging in dodgy business practices either...)

Immediate Murder Professionals (or I.M.P.) is an assassination law-firm of demons who are hired to kill people on Earth.

Immediate Murder Professionals (or I.M.P.) is an assassination law-firm of demons who are hired to kill people on Earth.