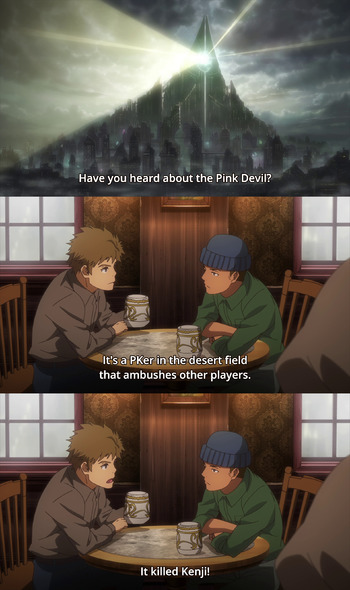 Oh come on. That's not a scary name for a player killer now.

Player Killing is the act of killing another player's Digital Avatar in a multiplayer game. While the term could apply to all genres, it is used primarily in cooperative focused games (mostly MMORPGs) to designate "unnecessary" kills. Games such as first person shooters don't usually have the term applied to them because the whole focus is to kill other players (if in a team setting, it's usually called "Team Killing" if you kill your teammates). The term usually comes up when it's viewed as a dishonorable action, usually referring to kills that were done for griefing purposes.

Player killing can be done either directly or indirectly. Direct player killing is just fairly straightforward attacking of other players. Indirect player killing can take many forms. Whether it be through manipulating other monsters to attack a player, causing a monster currently being fought to perform an otherwise avertable action, abuse of the game mechanics, or simply agreeing to team up to defeat a more powerful opponent, then abandoning the poor victim to fight a monster he can't possibly defeat by himself without any of your promised support, this has become significantly more common due to the fact that most MMORPGs don't allow non-consensual Player Versus Player any more.

The issue of player killing is as old as MMORPGs themselves, with Ultima Online becoming infamous for player killing right from launch. The game initially had all incentive and no recourse for player killing, leading to a very hostile world that made starting out extremely difficult. Due to the fact that other players can steal from the corpse after they killed a player, it became a case where the best way to gain wealth was not to actually go out and earn it, but instead to mug other players. All the richest players would end up being sociopathic killers. Over time, many attempts were made to alleviate this issue, but it took a fully optional system of whether or not you would be subject to player killing before players were happy.

Games that allow Player Killing may result in some players becoming Player Killer Killers. These people focus on killing other player killers only, as a form of in-game police to punish griefers and otherwise discourage pointless killing. This inevitably leads to others pointing out that they are themselves player killers, and asking whether they are any better then the player killers.

One of the major issues of The Great Player Versus Player Debate. Also can be in the form of a Griefer where a person kills other players (friend or foe and mostly weak players at that) for the sheer humor of it.