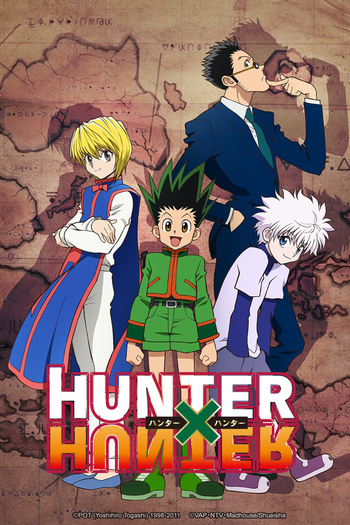 From left to right: Kurapika, Gon, Leorio, and Killua
“Fearsome monsters.. Exotic creatures... Vast riches... Hidden treasures... Evil enclaves... Unexplored lands... The word “unknown” holds magic. And some incredible people are drawn to that magic. They are known... as Hunters!”
— Opening speech of the 2011 anime
Advertisement:

Hunter × Hunternote Pronounced "Hunter Hunter", not "Hunter Versus Hunter", "Hunter Cross Hunter", "Hunter Ecks Hunter" or "Hunter Times Hunter" is a Dark Fantasynote Well, more like Crapsaccharine fantasy adventure manga series drawn and written by Yoshihiro Togashi, who began working on the series in 1998. It's known for many things- its long hiatuses, its large and engrossing world, its colourful cast of surprisingly deep characters that often have as much screentime as the four heroes and a heaping helping of rather extreme darkness that can make it fairly grim for a shonen series.

In a world much like our own, but with more danger and more mystery, a young boy named Gon Freecss, raised since infancy by his aunt, discovers from a traveling stranger his father's true identity: Ging Freecss, a world-famous Hunter.

In this world, you see, there are elite mercenaries known as Hunters. And Hunters truly are elite: among other benefits, they get access to world-class amenities and exotic locales that are off-limits to ordinary people. Of course, the life of a Hunter is also dangerous, for Hunters make their living taking on some of the most dangerous missions on Earth. Some scour the world for treasures or exotic goods, while others are Bounty Hunters who track down the world's most dangerous criminals. Gon isn't so much interested in riches or fame, however: he wants to be a Hunter so he can track down his father.

Just becoming a Hunter is an adventure in itself. During the incredibly difficult and incredibly dangerous "Hunter Exam," Gon faces peril both natural and man-made. He also acquires a circle of friends, such as Leorio, a Jerk with a Heart of Gold who wants to become fabulously wealthy so he can become a doctor and open a free clinic; Kurapika, a blonde Bishōnen who is last of the Kurta Clan, which was hunted into near-extinction by those who sought the Kurta's "Scarlet Eyes", which turn a fetching shade of red when emotionally excited; and Killua Zoldyck, the middle son of a Dysfunctional Family of notorious assassins.

In 1998, a short OVA based on the first two chapters premiered at the Jump Super Anime Tour. An anime adaptation later premiered in 1999, stopping midway through the Yorknew City arc in 2001, with OVAs later covering the rest of the Yorknew arc and the Greed Island section before catching up with the manga in 2004. Seven years later, it was given another adaptation in 2011 which covers nearly all the series up till the Election arc in 2014, since the manga's hiatus meant the Dark Continent arc was on and off.

In 2008, the original anime was licensed by Viz Media, but had various alterations to the DVD release, without informing the fanbase, causing sales to tank.

Weekly Shonen Jump's double issue #35-36 in 2011 ultimately confirmed that the series would get a complete anime remake, disregarding the previous animated series and OVAs by Nippon Animation to start from the very beginning of the story; it was animated by Madhouse with Studio Live and directed by Koujina Hiroshi, the character designs handled by Yoshimatsu Takahiro.

In 2001 a video game was released: Hunterx Hunter Altar Of Dragon Vein.

Two movies for the series were also released. Surprisingly both in the same year of 2013: Phantom Rouge and The Last Mission.

The 2011 anime was one of the most requested shows for Toonami on [adult swim], and fans finally got their wish when Viz Media announced that their brand new English Dub for the series would premiere on the block on April 16, 2016 at 1:00am EST, taking over Parasyte -the maxim-'s slot once that show ended its run.

open/close all folders
A-B
C-D
E-K
L-R
S-Z
You should enjoy the little detours to the fullest. Because that's where you'll find the things more important than what you want.
Feedback

Kurapika fights using chains with various powers, symbolizing his unbreakable willpower and desire to see the Phantom Troupe dragged down to hell.

Kurapika fights using chains with various powers, symbolizing his unbreakable willpower and desire to see the Phantom Troupe dragged down to hell.