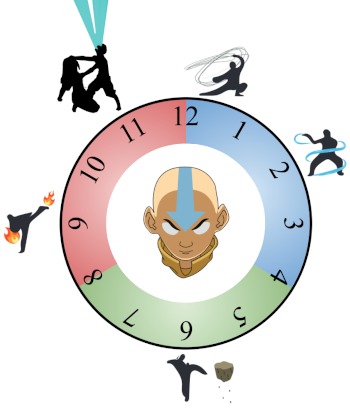 It took three seasons to master all four elements. That left one day to master the element of surprise.
"Make the final effort! Shoot the star to defeat the final enemy!"
— The Star Rod's description, Kirby's Adventure
Advertisement:

Many times, right as The Hero is facing his Darkest Hour before The Climax and final battle, he's rewarded one final gift from fate that gives him the strength to see through The Quest. Exactly how such a thing manifests varies widely: Perhaps it was triggered by The Power of Love or The Power of Friendship (or at least some good old Heroic Resolve).

In any case, he has just received the ultimate Heroic Second Wind and resolution of the narrative can't be far off.

Note that where Video Games are concerned, if the superpower is a new gameplay ability or Power-Up for the character acquiring it, it is often Purposely Overpowered (i.e., if the player could acquire it earlier, it might prove a Game-Breaker) — but the game may also regulate or limit its usage to ensure that the player can only use it at its designated time. For example, a plot-oriented Final Boss may start out as a Hopeless Boss Fight until the player uses the superpower, which cuts the boss down to size for a more fair fight. On the other hand, if the superpower is too powerful, it can end up making the fight anticlimactic.

Such a power should probably be given a hint of Foreshadowing earlier on (and hopefully nothing too obvious), otherwise it may feel like a cop-out. Also, if the story does not end soon after the power is introduced, it can turn into a Story-Breaker Power, though sometimes players may get access to the power-up in the New Game+ or Endgame+ after they have beaten the game, making it a sort of Bragging Rights Reward.

This type of power-up is most likely to fall prey to the Bag of Spilling if a sequel is released; even if the character has access to the other abilities they learned in the previous game, this one will be noticeably absent (sometimes with a justification like the power-up being temporary or the character losing access to the item needed for it), though they may be able to regain it again (after a lot of work).

See also the Sword of Plot Advancement, which tends to be something more like an "Eighth Hour" superpower (if not earlier), and Turns Red, where a villain or an enemy gains a superpower on the verge of death.

A Sub-Trope of New Powers as the Plot Demands. Contrast Second Hour Superpower, which is a powerup, item, or skill obtained very early on (often after the first chapter or tutorial) and is a staple (if not keystone) of a character's repertoire.

Also contrast A Taste of Power, which is basically a "First Hour Only" Superpower, and is subsequently lost. A subtrope is the Last Disc Magic (which tends to be more of a Tenth Hour Superpower).

Since this trope is obviously about something that happens near the end of a work, expect unmarked spoilers below!

After Sprig is tossed out the window by Andrias, Anne's bond with him, plus her connection with her Calamity Gem which she still has, allows her to tap into her Calamity powers and fight Andrias.

After Sprig is tossed out the window by Andrias, Anne's bond with him, plus her connection with her Calamity Gem which she still has, allows her to tap into her Calamity powers and fight Andrias.