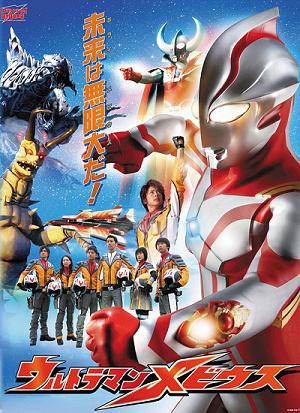 It's been exactly forty years now that the Earth has been under threat from monsters and invaders.
During a time when it seemed that everyone's smiles would be taken away,
they came from the far distant Land of Light:
those dependable heroes called "the Ultra Brothers".
And now Ultra Father has sent one young champion to the Earth.
His name is...
— Opening Narration
Advertisement:

Ultraman Mebius is the 17th TV series and 40th anniversary production in the long-running Ultra Series. It ran from April 8, 2006 to March 31, 2007, with a total of 50 episodes. Was preceded by Ultraman Max and succeeded by Ultraseven X. Unlike the other Heisei series before it, Mebius goes back to the main Showa continuity of the franchise.

For the first time in 25 years, an Ultraman is sent to Earth to protect it from aliens and monsters which would start to appear again. The Ultra Father entrusts the Earth to their newest member, Ultraman Mebius. Under the guise of Mirai Hibino, Mebius joins the Earth defense team GUYS in the Japan branch to better fend off threats to its people. What follows is an epic loveletter to the entire Ultra Series and capstone to the original Ultramen.

arrived on the service.