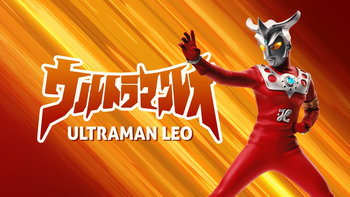 The eye of the lion is shining... Ultraman... Leo!
Advertisement:

Ultraman Leo is a tokusatsu series that was part of the Ultra Series. It ran from 1974-1975.

The alien Magma, intergalactic slavers, come to Earth to attempt to find more slaves for their expanding evil empire. However, the Ultra Warriors have sent an Ultra to protect the Earth from the Magma — Ultra Seven.

The Magma, along with a slew of monsters, overwhelm Seven and injure his leg. Just as Seven is about to be killed, a red giant comes to save him. Driving off the Magma and defeating the monsters, the mysterious red giant reveals himself to be Leo from planet L77 of the Leo constellation, a neighboring galaxy near the Ultra Nebula M78. Experiencing the same situation as the Ultras, Leo's people (called the Galactic Lion people) also underwent a physical transformation into beings of light.

The Galactic Lion people were subjugated as slaves of the Magma, and being one of the people who has been on the run and fighting the Magma across the galaxy, Leo has tracked them down on Earth.

Ultra Seven, seriously wounded, requests that Leo take his place as the resident Ultra Warrior on Earth, and bestows upon Leo the title of "Ultraman Leo". Ultra Seven, as Moroboshi Dan, agrees to stay with Leo to train him as a mentor. Leo takes on the form of human "Ootori Gen" (a human guise rather than merging with an existing human), and with Dan, joins the M.A.C.—yet another monster fighting science patrol crew.

Over the course of his assignment on Earth, Leo reunites with his twin brother Astra, who escaped the slave pits of the Magma, and joins with Leo to combat evil monsters. Leo also meets up with the legendary, all-powerful Ultraman King, who comes to save Leo and Astra on a particularly disastrous fight.

The other Ultra brothers also come to help Leo and Astra, and occasionally gets help from the recovering Ultra Seven, proving his worth as an Ultra Warrior.

, along with Ultraman Max, Ultraman Mebius and Ultraman 80.