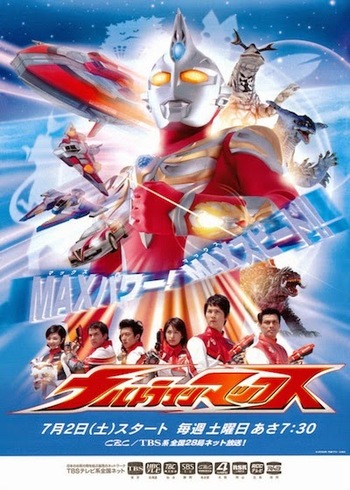 Ultraman Max is the eighteenth installment in the long-running Ultra Series, airing from July 7, 2005 to March 25, 2006 with a total of 39 episodes (plus one special comprised mainly of stock footage). It was preceded by Ultraman Nexus and succeeded by Ultraman Mebius.

In the not-too distant future, monsters appear around the world and attack mankind. To combat the threat, the United Defense Federation creates the special anti-monster task force DASH (Defense Action Squad Heroes). Aiding DASH in its struggle is the alien giant Ultraman Max, who is secretly Touma Kaito, a DASH pilot.

After the darker and less kid-friendly and screwed-up spin on Ultraman in Ultraman Nexus, Tsuburaya Productions returned to the franchise's roots, with a new monster every week and an overall light-hearted tone. Ultraman Max is notable for several callbacks to previous Ultra series, from reintroducing several famous Ultra Monsters and casting players from the original Ultraman to paying homage to the plots of past episodes and even referencing the first Ultra series, Ultra Q. In contrast to the low ratings of Nexus, Max was a huge success and set the tone for future Ultra Series like Mebius.