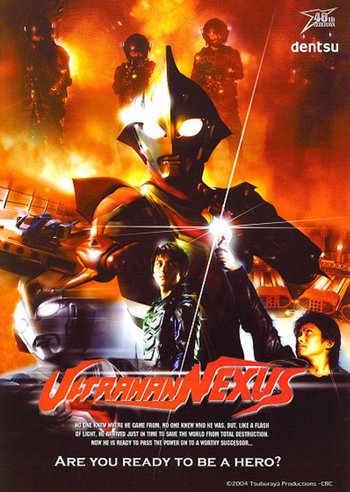 ◊.
The Light is a bond. Someone will inherit it, and it will shine again.
— Jun Himeya to Kazuki Komon
Advertisement:

Ultraman Nexus is the 20th entry in the Ultra Series. It was produced by Tsuburaya Productions and aired on Tokyo Broadcasting System from October 2, 2004 to June 25, 2005 with a total of 37 episodes note  Originally 52 episodes, but reduced to 37 due to horrible ratings caused by major network screwing . An extra unscreened episode was included in the DVD compilation.

Set in 2009, Ultraman Nexus is set in an Earth not unlike our own. While humanity blissfully goes about its daily life, a secret war is being fought in the shadows between the Terrestrial Liberation Trust (TLT) and monstrous alien invaders known as the Space Beasts. The main branches of TLT are the Night Raiders, military response teams who are tasked with eliminating Space Beasts, Memory Police, who erases the memories of witnesses and survivors of Space Beasts attacks as part of TLT's cover-up efforts and White Sweepers, an armed team dressed in Hazmat Suits tasked with the destruction of evidence and recovery of research subjects.

The series focuses on the life of Kazuki Komon, a former rescue worker turned recent inductee in the Night Raiders and his struggle to cope with his new life. Faced with a world where nothing is truly what it seems, he becomes embroiled within a shadowy conspiracy involving a mysterious silver giant, giant monsters manipulated by an unknown hand, Dark Ultramen and the hidden agendas within TLT. itself. The series, focusing on Kaizuki Komon rather than the titular Ultraman Nexus, also abandons the Monster of the Week concept and focuses on longer character driven arcs. Nexus is also relatively unique in its concept of the passing of the ability to transform into Ultraman between Deunamists (Humans who can become Ultraman) as well as the use of a Meta Field to draw monsters into pocket dimensions to prevent further destruction.

It is considered a much Darker and Edgier series than its predecessors, similar to what Ultra Q Dark Fantasy did to its original.

in all territories except Asia. It is the sixth Ultra series installment licensed by the company, and the eighth overall to be licensed in the US.