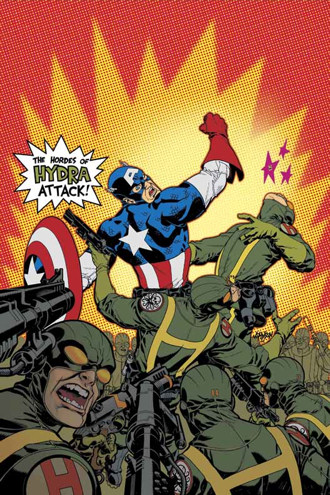 And he's a One Man U.S. Army.
Loki: I have an army.
Tony Stark: We have a Hulk.
— The Avengers
Advertisement:

Sometimes The Hero (or The Big Guy in their team) will face a large horde of Mooks and tell their leader they're going down. The leader will often say, "You and What Army?", then discover that the hero doesn't need one. This one person is the army and can go around killing thousands of enemies.

The One-Man Army does far more than pull their own weight. Villains tend to underestimate this person at first, considering him Just One Man. They are quickly proven wrong. This is often justified by making the character a Super Soldier against mundanes, possessing far superior weaponry, or otherwise tremendously advantaged.

The damage to the psychological state of someone like this is not always considered. It is usually affected by taking so many lives away. The impact of this is lessened if the character is explicitly a Living Weapon and/or if the enemies are Faceless Goons or don't register as human beings and therefore exist solely to provide a Mook Horror Show. Alternatively, the character may inflict Non-Lethal KOs instead.

In a series aimed at younger audiences, they may simply defeat large masses of people rather than outright kill them. In playing this trope, it is useful to have The Evil Army try to Zerg Rush said character in The War Sequence. This trope caters to everyone's inner Munchkin; 99% of First Person Shooters ever made fall under this.

Often goes hand-in-hand with It's Up to You and Walking Armory. When the One-Man Army is intentionally sent out to take care of the problem by himself, it's a case of One Riot, One Ranger. Compare and contrast Person of Mass Destruction, who's symbolically treated like a weapon by the setting, and Omnicidal Maniac, who is all too willing to push themselves into this territory. In the latter case, the Omnicidal Maniac often gains their kill-count through using WMDs on hapless civilians rather than personally fighting enemy combatants. Villains who are like this aren't bothered by Mook Depletion.

Being one of these qualifies you as a Crew of One (though not for a Big Badass Battle Sequence). However, very few people will respect your ability, or worse, seek to abuse it because "We Do the Impossible" is in effect. Contrast with the Badass Army where each individual could be considered this but are part of said army, as well as the Easily Conquered World where it's the severely, severely outnumbered enemies who are kicking ass and taking names. If one man makes the army, then you have The Minion Master. Likewise, if one man becomes the army, it's Me's a Crowd. May be a case of The Dreaded, where the hero is more of a Terror Hero and is single-handedly the most dangerous entity on the battlefield to the point where the enemy may begin focusing on him/her out of knowledge that if they can't defeat the hero, they're going to lose hard.

Compare Showy Invincible Hero and The Ace. See also Conservation of Ninjutsu, which postulates that being outnumbered is what gives the character the advantage. Compare Gideon Ploy for a more literal one-man army. A subtrope of Quality over Quantity.

While Real Life examples do exist, this is generally not a good idea in Real Life.

Alternative Title(s): Army Of One, One Woman Army, One Man Armies