One Dose Fits All 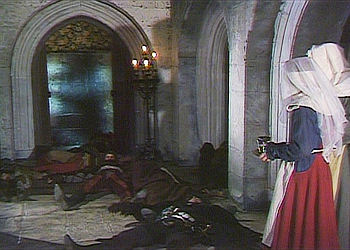 Seven men take a sip of poisoned wine, and all die within a few seconds of one another.
Belkar: Hey, Ears, what are you doing?
Vaarsuvius: Feeding your [Allosaurus] some rudimentary defensive potions while blocking out all thoughts concerning pharmaceutical dosage specifications.
— The Order of the Stick

Alice has decided to murder Bob and Carol, and serves them each a mug of coffee, into which she has secretly mixed a dosage of cyanide. Both drink their coffee, and five minutes later both Bob and Carol begin to dramatically cough and clutch at their chests, each dying within about ten seconds of one another.

But hang on — Carol gulped her coffee back in a few mouthfuls, whereas Bob sipped his and barely drank half of it. Additionally, Bob is six feet tall and weighs nearly twice as much as the petite Carol. How can the same poison possibly have killed them both at the same time, given the differences in body mass and how much poison each of them consumed?

This trope refers to those Fridge Logic-y moments in which a poison (or sedative, tranquillizer, medicine etc.) is administered to several different people and takes effect on all of them after roughly the same period of time and with the same effects, despite differences in body mass, how much of the substance was administered and constitution. Sometimes the people affected are even of different species, such as a poison simultaneously administered to both an adult male and a dog, who nonetheless react identically to any poison administered. Supposing that, in our example above, Bob is a human whereas Carol is a three-headed Martian whose species evolved under entirely different circumstances to our own; how could we possibly expect Carol to react in the same way as Bob to being poisoned (sedated, etc.)?

One way to Hand Wave this in-universe is for the poisoner to explain that they based the dosage on the heaviest person present, and administered the same amount to everyone. However, if that was the case, the poison should presumably take effect on the lighter individuals significantly earlier than the heavier ones, rather than everyone being affected within a few seconds of each other; and you still run into the problem of the dosages being inconsistent (if, for example, Bob drank more or less coffee than Carol). Additionally, this explanation doesn't work in the case of sedatives or tranquillizers: if you base your dosage on the mass of the heaviest person present and administer the same dosage to a lighter person, it could potentially not just render the lighter person unconscious but also cause brain damage or even death (this is why anaesthesiology is such a complex discipline).

This trope is related to, but distinct from, Instant Sedation. In Instant Sedation, a drug is administered to a person or group of people and the drug takes effect after a very brief space of time (say, a few seconds). In this trope, it does not matter how long it takes the drug to take effect (from a few seconds to several days), as long as it takes effect on all of the victims after roughly the same period of time (despite differences in dosage, body mass, and constitution). The two tropes can often overlap, however.

In Video Games, if a poison or sedation mechanic is featured it's very likely to be an example of this trope, assuming the enemies the poison or sedative can be used on are of diverse sizes and constitutions. This could probably be considered an example of an acceptable break from reality or an Anti-Frustration Feature, as enemies responding differently to drugs depending on their size wouldn't exactly be a meaningful test of the player's relevant skills, and would be more likely to annoy players more than anything else. In addition, if Hit Points scale with size and constitution, a poison that does a given amount of hit point damage therefore does require a higher dose to kill a bigger, stronger enemy, averting this trope.

A sub-trope of Artistic License – Medicine, Artistic License – Biology, and Artistic License – Pharmacology. See also Instant Sedation, Tranquillizer Dart, Knock Out Gas, Deadly Gas, Slipping a Mickey, and Tampering with Food and Drink. Frequently applies, even more illogically, to the Healing Herb. If the same drug affects people the same way despite differences in species (including, for example, humans and aliens in Speculative Fiction works), this trope overlaps with No Biochemical Barriers. For a more violent and equally unrealistic means of rendering someone unconscious, see Tap on the Head.

Note: The key element of this trope is that it shows the same substance affecting more than one entity (human, animal, alien etc.) in the same way, even if it logically shouldn't (because of differences in dosage, body mass, constitution, species, etc.). If you have an example of a poison or sedative etc. affecting just one individual, it's not this trope.