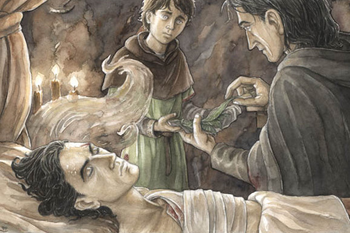 A plant has a power to cure all sorts of wounds and act as the Magic Antidote.

One of the favorite forms of an external healing source, close to Healing Potion, of which it may be one ingredient. Among its other advantages, it can make a good MacGuffin. It can also show a person is close to nature and even symbolize that nature makes characters well.

A certain amount of Truth in Television: many plants are the root source of medicines.note A surprising number of medicines were discovered by either investigating folk cures (some of which actually worked, and some of which did not) or by taking extracts from random plants (you get a bunch of work-study students, you drop them off a mile apart along some backroad with a box of bags, and you tell them "pick up five of everything you see") and running them against various screening tests to see if they did anything (this approach is generally called "Weeds and Seeds" or "Find 'Em and Grind 'Em"). However, in Real Life, they are not Magic Antidotes. Like drugs derived from them, herbs can have side-effects, sometimes quite serious, even fatal; they can interact with other drugs; and unlike the drugs, natural variation in growth means the dosage is unpredictable, and there will certainly be impurities. For safety reasons, therefore, do not include Real Life examples. Someone serious about herbal medicine can find much better sources than this wiki.

In fiction, they are more likely to be a Panacea. See also Fantastic Fruits and Vegetables. The realistic version is That Old-Time Prescription. The Spice Rack Panacea is another take on it, where a herbal remedy cures something in fiction (or is proclaimed to cure something in real life) that it technically should not be able to cure. The Flower from the Mountaintop is sometimes a Healing Herb.