Literature / The Two Princesses of Bamarre 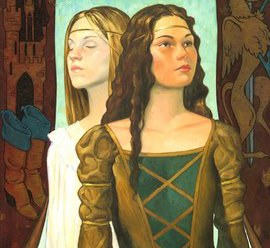 The Two Princesses of Bamarre is a young adult fantasy novel written by Gail Carson Levine (of Ella Enchanted fame) published in 2001.

Princesses Meryl and Adelina of Bamarre are polar opposites. Meryl, the elder, wants nothing more than to embark on a grand adventure. Addie, the younger, wants nothing more than to stay at home under Meryl's watchful eye for the rest of her days, in peace and safety. The land of Bamarre is home to specters, which lure travelers to their deaths unless exposed, sorcerers, ogres, dwarves, elves, gryphons, dragons, and fairies. Fairies, however, have not been seen since Drualt, Bamarre's greatest hero and subject of myths, went up to visit them after the tragic death of his sweetheart Freya. Bamarre is also plagued by a fatal disease called the Grey Death, which has three stages: Weakness, Sleep, and then Fever. While the weakness may last for a few days to weeks, the sleep stage always lasts nine days, and the fever always lasts three. A prophecy foretells that the cure for the Grey Death will come "when cowards find courage and rain falls over all Bamarre".

Then Meryl is struck down by the deadly disease. Desperate to save her sister, Addie must put aside her fears to Find the Cure! in a Race Against the Clock.