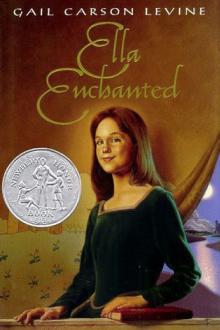 Ella Enchanted by Gail Carson Levine is a Twice-Told Tale based on the Fairy Tale "Cinderella".

At birth, Ella, the protagonist, is given the "gift" of obedience by Lucinda, a fairy. Thus is Ella forced to obey every direct order given to her, no matter what. Eventually Ella learns to fight the curse, delaying her obedience, but she becomes sick when she tries. She also works around the curse by not doing exactly what is wanted when the wording of an order is not clear enough.

The basics of "Cinderella" are in Ella Enchanted: There is a Missing Mom, then later a Wicked Stepmother. There is a Disappeared Dad, as Ella's father is often away on business. (The closer the book gets to the climax, the more Cinderella plot elements are included.)

A film adaptation based (very loosely) on the book was released in 2004.

Fairest is a companion to this story. In 2018, Levine published a prequel titled Ogre Enchanted.