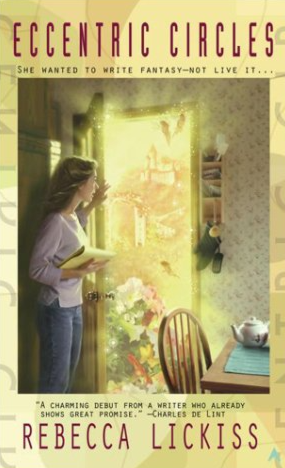 Scholarly, literarily inclined Piper Dickerson inherits her grandmother's Victorian cottage, an acre of land, and a large library. While the library looks to her as an opening into a career as a fantasy writer, the backyard actually is an opening into the realm of Faerie. One of Piper's first Faerie encounters is with Aerlvarim, a compellingly attractive elf, and later she meets urban-fantastical dwarves, wizards, and so forth. Yet as Piper's grandmother's death begins to look mysterious and then sinister, Faerie comes to seem not wholly benign. Without knowing exactly who are friends and who foes, and possessed of only the magical knowledge she can scrape up out of the library, Piper has to unravel the mystery, preserve her and her friends' lives against unseen enemies, and struggle for peace between the human and fairy worlds.

Eccentric Circles is a novel by Rebecca Lickiss, in which Piper inherits a house whose back door opens to the Magical Land of Fairy and has to figure out what her late grandmother had to do with this land... and how it might have led to her death.