Literature / Dragon of the Lost Sea 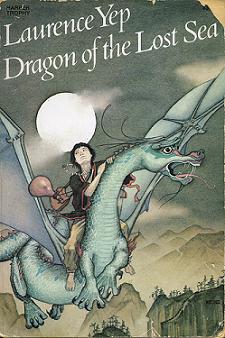 The first book of Laurence Yep's Dragon Series, followed by Dragon Steel, Dragon Cauldron and Dragon War. It was first published in 1982.

It starts off with Shimmer, the exiled dragon princess roaming ancient China in the form of an old human woman. She meet the kindhearted kitchen boy, Thorn, who is mistreated by his caretaker. The two form an unlikely friendship, and after saving his life from an enchanted paper servant, Shimmer decides to take him under her wing.

It turns out that Shimmer has been wandering for years in search of the witch Civet. Over a hundred years ago, Civet had used her powers to drain the Inland Sea, Shimmer's former home, of all its water, leaving nothing behind but a desert wasteland of salt flats.

Together, Shimmer and Thorn travel towards where they believe Civet might be headed, meeting up with the mischievous Monkey, who both hinders and aids them on their quest.