Our Dwarves Are All the Same 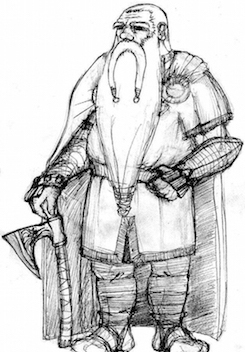 Standard-Issue Dwarf.
Celia: He has an accent.
Haley: He likes beer.
Haley: He worships Thor.
Celia: And hates trees!
Cleric of Loki: Can you tell me anything about him that differentiates him from every other dwarf?
— The Order of the Stick
Advertisement:

'Dwarves': you know what they are. Gruff, practical, industrious, stout, gold-loving, blunt-speaking, Scottish-accented, Viking-helmed, booze-swilling, Elf-hating, ax-swinging, long-bearded, stolid and unimaginative, boastful of their battle prowess and their vast echoing underground halls and mainly just the fact that they are dwarves.

Ever since J. R. R. Tolkien raided the Norse myths for good stuff, dozens of fantasy worlds have included them as one of the Standard Fantasy Races... and most of them have stuck closely to the original. Tolkien's importance to this can be gauged by the fact that the plural form dwarves, which he used to distinguish his dwarves from other dwarfs, note It was originally a recurring mistake during the writing of The Hobbit (or rather "a private piece of bad grammar" that sneaked into the text), but it quickly became an Ascended Glitch. is now regarded by many as the standard plural (at least regarding fantasy — "dwarfs" is still the accepted plural for humans with dwarfism). Fantasy writers who use "dwarfs", like Terry Pratchett, are now the unusual ones. note There is a small group that contends that the proper plural should be "dwarrows" or "dwerrows", reconstructed modern English forms of Old English dweorgas or dweorhas, in turn the plural of dweorg or dweorh, from which dwarf evolved (compare Old Norse dverg and dvergar). Tolkien was the first to suggest this, likening it to "man/men" and "goose/geese", but thought it was too archaic. Within this small group, some also use "dwarrow" or "dwerrow", singular. (Many "Tolkienesque" dwarves, however, are more like the Theme Park Version.) Since The Film of the Book(s), they now even all talk the same. A lot of dwarves are Scottish or have some other accent that reads as “rustic” to English speakers — Northern or south-western English, Welsh,note  John Rhys-Davies, who played archetypal dwarf Gimli in the LOTR films, is Welsh. Stephen Briggs, who does the Discworld audiobooks, also gives many of them Welsh accents, as they often come from Llamedos, Discworld Wales. Irish, or Russian accents are common. Oddly, despite the strong Norse influence, dwarves with any sort of Scandinavian accent are extremely rare. An entire race of miners and blacksmiths, with names like Dwarfaxe Dwarfbeard and Grimli Stonesack, who are overly sensitive about any perceived slight, always spoiling for a fight, unable to speak two sentences in a row without calling someone "lad" or "lass," and possessed of a love of gold and jewels that drives them to live in Underground Cities where they dig deep and greedily (often with catastrophic results).

In the decades following Tolkien, they will often be depicted as more technologically minded than other fantasy races, verging on (and sometimes overtaking) Steampunk, but this is in keeping with their engineering and crafting skills both from the classic Fantasy depictions and from actual mythology. Their societies tend strongly toward a Reasonable Authority Figure (usually a warrior king) ruling over a socially conservative but rather egalitarian society of soldiers, miners, and craftsmen. In most settings, dwarves and humans have enough in common to treat each other with respect. They are frequently allies against outside threats.

The dwarf will often serve as The Big Guy (ironic, considering their stature) of a fantasy Five-Man Band, especially since his Weapon of Choice tends to be either an axe or a hammer. Ranged combat is not their preference, but if they aren't able to force enemies into close quarters, you can expect guns (Fantasy Gun Control permitting), throwing axes, or crossbows — in about that order. Dwarf rogues are rather uncommon in fiction, as their stocky frames make sneaking around look unconvincing, and their culture values honesty and openness; however dwarfs will usually know a thing or two about brawling and fighting dirty, which overlaps with the rogue archetype and being masters of crafting mechanical devices means they tend to know a thing or two about picking locks and disarming traps. Likewise, dwarven mages are vanishingly rare. In fact, it's not uncommon for the entire race to be at least somewhat magic-resistant. If a dwarf wants to use magic, he'll infuse it into a sword or an axe so he can physically beat the enemy with it instead. If legends speak of an Ultimate Blacksmith from a bygone age who once forged all manner of powerful enchanted weapons and equipment, then he was probably a dwarf. If you happen to come across any of this legendary equipment and discover that the centuries haven't been very kind to it, then the only guy in the world who can help you get it back into fighting shape is probably a dwarf too. Might even be the same one, depending on how long-lived they are in the setting.

Often they get treated as a functional One-Gender Race; one of the only widespread (but not universal) novelties is what the women look like. Even then, the most common ones seem to veer somewhere around "Grandmother from the Old Country"/"adorable" (depending on age) or "you're looking at one now" (with the Girls with Moustaches that implies). And in contrast to elves (which are generally treated as universally androgynous and bisexual), dwarves are almost always portrayed as heterosexual, uninterested in sex with non-dwarves (there's a reason that half-elves are a stock fantasy race and half-dwarves are not), and possibly even uninterested in sex for non-reproductive purposes. Female dwarves might occassionally be portrayed as being Butch Lesbian, and the few homosexual male dwarves in fiction are typically Manly Gay.

An exception to this rule is the fantasy setting's Cutesy Dwarf, who is often based on Snow White and the Seven Dwarfs; this variety shares traits with our kind of Dwarves, but will be less of a tough guy and more of a charming man-child, and will scrap the ale-drinking and ax-wielding to focus on craft and mining.

For another fantasy race derived from subterranean fairy spirits and often associated with underground places and metalwork, see Our Kobolds Are Different. Not to be confused with Little People Are Surreal or Depraved Dwarf — once again, dwarves are fantasy creatures; dwarfs are short humans (except in Discworld and Warhammer), and nowadays the polite term for the latter is "little people".

These Dwarves are Rather Dwarivative

These Dwarves are More Dwarvergent

These Dwarves are Too Bizarre to Have a Suitable Pun

Alternative Title(s): Our Dwarves Are Different