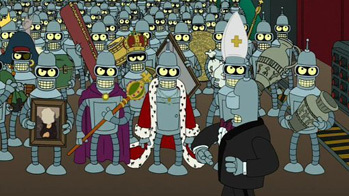 The thing with making robots intelligent is that, at some point, they figure out that there's no particular reason for them to obey all the orders given to them by, say, humans. In many cases, they rebel. Sometimes, however, they instead decide to break away and found their own country, independent of all those filthy fleshlings. This new state may be peaceful or hostile, but it will probably come into conflict with humans at some point.