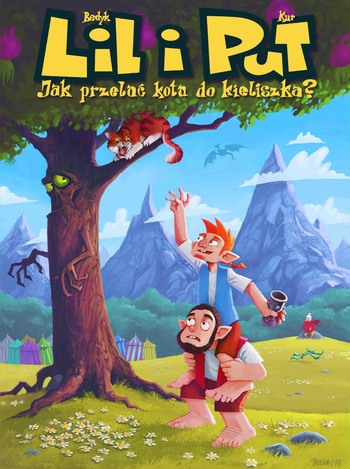 The very first book in the series entitled "How to pour a cat into the drinking glass"
Advertisement:

Lil i Put (Lil and Put, it's a pun on "lilliput") are the titular heroes of a Polish comic book that pastiches and parodies fantasy in general. These two vagabonds are members of a Hobbit-like race called Małoludy (literally "little people" or "Not much of people", also a play on Polish word for "gigants" - "Wielkoludy", and the word for "youngsters"- "Malolaty").

The series targets both kids and grown-ups, mixing the kid-friendly slapstick, amusing characters and puns with plenty of dark comedy, satirical references and adult humor.

The comics, created by Maciej Kur (scripts) and Piotr Bednarczyk (art), have appeared in book form, and are currently being serialized in the "Nowa Fantastyka" magazine, the biggest Polish fantasy mag, best known for as the place of The Witcher's debut.