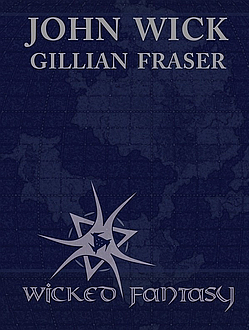 Wicked Fantasy is a Low Fantasy Tabletop RPG created by John Wick, Jess Heinig, and Gillian Fraiser. Originating as a series of articles in Kobold Quarterly, a Pathfinder online magazine and Spiritual Successor to Dragon Magazine, it was collected into its own sourcebooks and published as the Wicked Fantasy Corebook and Wicked Fantasy Companion.

The game uses Pathfinder mechanics, making it part of the extended Dungeons & Dragons family tree — however, the Companion sourcebook contains rules for running the setting in Savage Worlds and Dungeon World games instead.

Wicked Fantasy is set in the land of Estevere, a realm that has for centuries been the home of humanity, since they journeyed from a now-forgotten homeland far across the sea. The Reign of Humanity is a secular, republic-empire comprised of ten city-states; although founded on noble principles, in recent years, it has begun to rot from within. Corruption, decadence and decay are setting in, the Reign crumbling in upon itself. Other races, marginalized, are struggling as the Reign presses down on them harder than ever. And all the while, the dread and mysterious Enemy waits, watching from the darkness.

It is a time in desperate need of heroes.