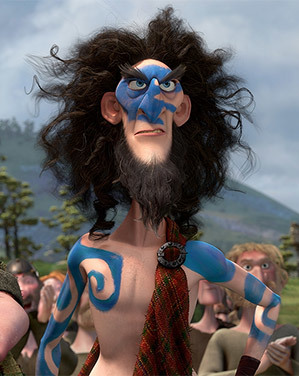 Whenever a native tribe, group or clan of some kind is shown, in a lot of cases they tend to have exotic face paint patterns on. This is a special type of Facial Markings / Body Paint, in that they're exclusive to that tribe, and don't have to be exclusive to a certain type of being. This can also cover warpaint and other marks exclusive to a single group.

Another, less flattering version of this can also commonly be seen in some older, stereotypical depictions of Native Americans too (alongside Braids, Beads and Buckskins), but due to it being considered by some to be pretty offensive nowadays, this version isn't very popular in the media today.

May also have Savage Piercings. If they only put it on when preparing for battle, see This Means Warpaint.