Our Titans Are Different 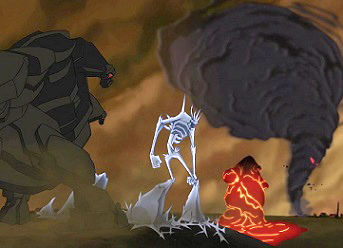 From left to right: Rock Titan, Ice Titan, Lava Titan, and Tornado Titan.
"Nothing tears us apart. In Greek mythology, the Titans were greater even than the gods. They ruled their universe with absolute power. Well, that football field out there, that's our universe. Let's rule it like titans."
— Coach Boone, Remember the Titans
Advertisement:

In Classical Mythology, the Titans (and their Primordial parents before them) were ancient godly beings that had ruled reality, until they were overthrown by the Olympians in the Titanomachy. The Titans were originally considered true gods. Later Classical writers started confusing them with Giants, but this was not the usual representation. Also, the name Titan sometimes only refers to the first generation, though usually the non-nymph, non-Olympian children of Titans are also called Titans.

Titans and primordials have since been featured in many works of fiction, and have several common traits among their varying depictions. These include:

Compare Our Giants Are Bigger, Our Gods Are Different, and The Old Gods. For the moon by that name, see The Moons of Saturn.

Is not related to different versions of the Teen Titans.

Alternative Title(s): Primordials, Titans, Our Titans Are Epic, Our Primordials Are Different, Primordial