The major gods of Classical Mythology.

The god-king of the pantheon; his domain is the sky and thunder, associated with leadership and law. He is just as well known, if not more, for his astronomical amount of lovers and children. The Romans identified him with their god Jupiter. note (or more accurately, Iupiter, a contraction of older Iou pater (literally "sky father"). The alternative English name Jove is derived from the oblique stem of Jupiter, Iov-. 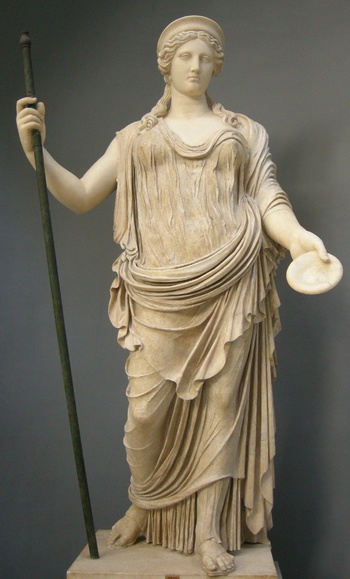 Zeus' older sister and wife. She was the goddess of marriage and women. Perpetually ticked off at anyone who wronged her, such as insulting her, allowing themselves to be seduced by her husband or being the love-child of such an assignation. The Romans identified her with their goddess Juno. 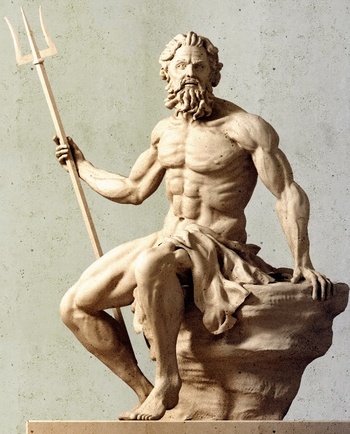 God of the oceans and earthquakes. The Romans equated him with their god Neptune, related to the Etruscan god "Nethuns." In the Mycenean period, Poseidon was a chthonic deity who may have been Top God, but these elements were lost over time.

Goddess of the harvest and "life" parts of the life-and-death cycle. Her name literally means "Earth Mother" (de + meter). The Romans equated her with their agricultural goddess Ceres, from whom English gets the word cereal.

Goddess of wisdom, which is a blanket term for things like strategy, defensive war, crafts, and justice. The Romans identified her with their goddess Minerva.

The messenger god and a Trickster God, Hermes is a good friend and a bad enemy. He is also the god of travelers, shepherds, cowherds, thieves, wit, written language, literature, commerce, cunning, and luck. The Roman god Mercurius (Mercury) was identified with him. 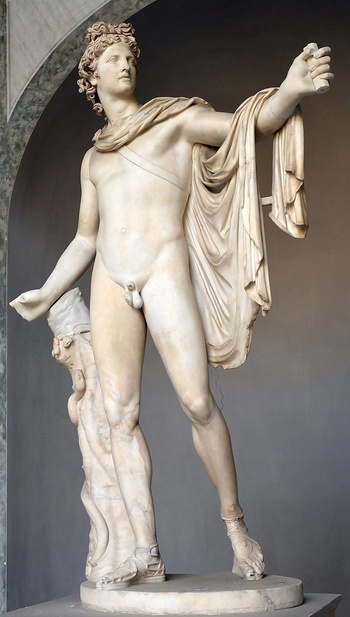 God of "beardless youth", light, archery, music, reason, poetry, prophecy, etc. Later, he also became a solar deity, with the partial assimilation of Helios into Apollon. Romans also associated Phoebus with Helios and the sun itself. However, they also used a variation of his Greek name; Apollo. 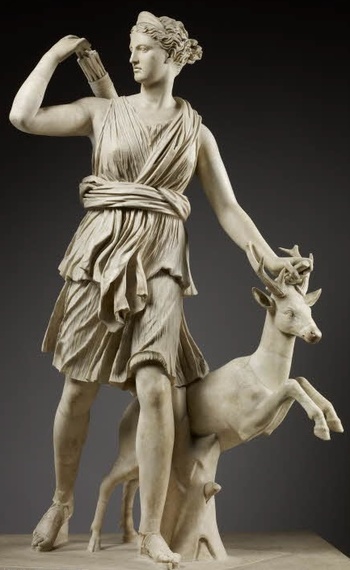 Goddess of young women, of virginity, childbirth (yes, both at the same time), Women's Mysteries, forests and hills, hunting, and, later, the moon (along with Selene). Essentially a liminal goddess who protected women throughout their lives. The Romans equated her with their goddess Diana.

The blacksmith god. He was rather hideously crippled: Authors differ whether he had been defenestrated during an argument between Mummy and Daddy, or just born with lame legs. His nearest Roman equivalent was the destructive volcano god Vulcanus (Vulcan).

The most prominent god of war. While Athena ruled over strategy and wisdom, Ares ruled brute force and courage. His nearest Roman equivalent was Mars, who however was also a god of agriculture (because wars were mostly farmers fighting over land in early Rome). The more martial Romans put Mars in a much higher place in their religion than the Greeks (or at least the Athenians and Thebans, from whom we derive most of our knowledge about Greek myth)note the Spartans, in particular, seem to have had a higher opinion of Ares, just as the Argives had a higher opinion of Hera put Ares, and in fact the Romans believed themselves to be Mars's descendants.

The goddess of love, beauty, and sexuality, who was also associated with looking after children (and, in the Athenian tradition, with marriage). As Aphrodite Ourania, this was extended to include what literally translates to "heavenly" or "divine love." In Rome, she was called Venus. 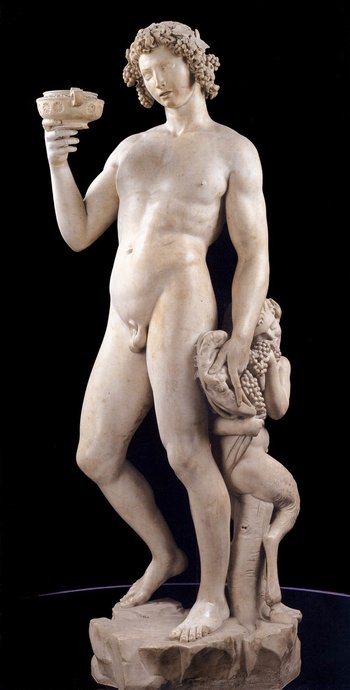 The god of wine, drunken debauchery, agriculture, theatre, and the freeing of self from normal behavior. He is always treated as a late arrival to Olympus, being one of the youngest of Zeus' children, born to a mortal woman. Romans called him Bacchus, from one of his many Greek titles, but also identified him with the Roman god Liber. 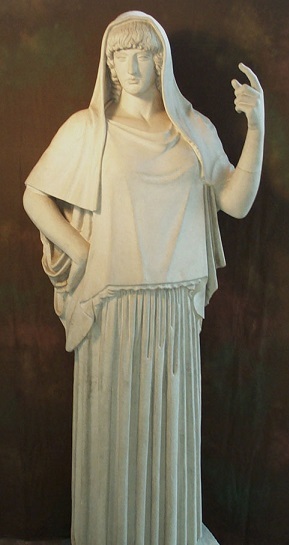 The Eldest child of Cronus and Rhea and Goddess of the hearth, meaning that she was the goddess of home, house, and family. An important goddess, but one whose domains did not lend to participation in many stories, which is why most people forget she exists. This, in addition to her modest and discreet nature, would keep her out of trouble. Her Roman equivalent was Vesta (as in "Vestal virgins"). 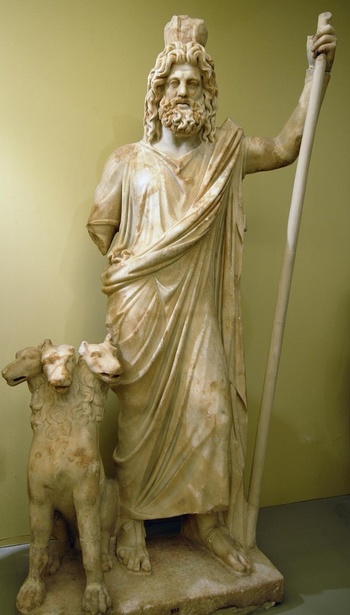 The god of the Underworld, though not a Grim Reaper-type figure (that would be Thanatos, who is often depicted as Hades's lieutenant). Reigned over the dead, wealth hidden in the ground and the earth as an element in general. Despite his association with death, his original depiction and characterization were never as despicable as the usual modern interpretation (though understandably, the Greeks still weren't too fond of the guy). In fact, he was a rather ambivalent figure towards mortals. note The only two times he interacts with mortals at all (defending Pylops from Heracles and lending Perseus his helmet), he's shown to be helpful. Romans called him Pluto, latinizing the Greek epithet Plouton/Ploutos (meaning "wealthy"; gold and silver come from underground, he's the lord of the underworld—makes sense, right?), and also named him Dis (Latin for "wealthy").

Goddess of spring, vegetation/flowers, and Queen of the Underworld. Daughter of Zeus and Demeter, she was abducted (theoretically) by Hades to be his queen. She spends half of the year with her mother and half of it with him. Though not numbered among the Twelve Olympians, she had more Greek worshippers than Ares, and she was a major goddess of the Eleusinian Mysteries alongside Demeter and Hecate. To Romans, she was known as Proserpina.