Pain to the Ass 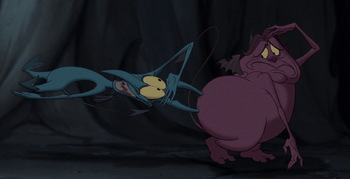 Ah, Panic... a pain in Pain's ass.
"His mother [...] told him, before his little milk tusks had dropped out, that elephants who were afraid always got hurt. Kala Nag knew that that advice was good, for the first time that he saw a shell burst he backed, screaming, into a stand of piled rifles, and the bayonets pricked him in all his softest places."
—Toomai of the Elephants
Advertisement:

Even though it hurts, pain can be funny. Butts can also be funny. So combining the two is hilarious!

This trope is pretty straight forward. A character receives some sort of trauma to their backside. As mentioned above this trope often appears in slapstick or otherwise humorous context. This is because in addition to the fact that butts, particularly large ones, are often seen as inherently humorous and because butts are naturally padded if something or someone strikes it there's less likely to be any serious injury involved.

This tends to happen to plumper characters more often since their butts are naturally bigger targets.