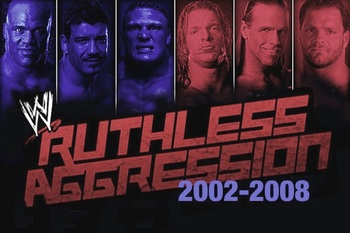 L-R: Kurt Angle, Eddie Guerrero, Brock Lesnar, Triple H, Shawn Michaels, Chris Benoit
Kurt Angle: Well, you tell me— what is the one quality that you possess that makes you think that you can walk out here and come into the ring and face the very best in the business?
John Cena: RUTHLESS! AGGRESSION! (immediately punches Angle in the face)
— WWE SmackDown, June 27, 2002, during Cena's in-ring debut.
Advertisement:

By 2001, the World Wrestling Federation had purchased its two main competitors, World Championship Wrestling and Extreme Championship Wrestling, to become the crowned ruler of mainstream Professional Wrestling in the United States. The only downsides were a saturation of active wrestlers on its roster, a failed InVasion angle, and a lawsuit from the World Wildlife Fund over their Acronym Confusion signaling the end of the beloved Attitude Era. WWF, however, weren't going to let these slight misfortunes ruin their spot atop the Sports Entertainment mountain, so they went back to the drawing board.

The first step was figuring out what to do with the acquired talents from WCW and ECW. Vince McMahon and co. took one of the many What Could Have Been ideas from the InVasion angle and launched a brand extension on March 25, 2002. The WWF roster would be split in two: one half wrestling on their flagship show Monday Night Raw and the other on their former B Show SmackDown. Each show would have their own rosters, General Managers, championships, and Pay-Per-View events, allowing equal opportunity for all stars to get TV time and avoid being lost in the shuffle, while creating a sense of competition between the two shows in order to bring out the best in everyone.

With a new name and new direction, all WWE had to do now was put their new era into action. On June 17, Vince McMahon called the Raw roster members into the ring and cut a promo talking about the quality that allowed him to nationalize professional wrestling, defeat his competition and become the billionaire that he is today - ruthless aggression - the same quality that he wanted from each and every WWE Superstar. That promo gave birth to the Ruthless Aggression Era.

While the Ruthless Aggression Era wasn't quite as crude and unpredictable as the Attitude Era before it, many agree that its far superior quality of wrestling more than made up for that. Want proof? This was the era that gave birth to the "Class of 2002", as 2002 saw an influx of young up and coming stars from WWE's then-developmental territory Ohio Valley Wrestling like Victoria, Shelton Benjamin, Batista, Randy Orton, Brock Lesnar, and last but damn sure not least, John Cena. This was the era that allowed smaller, more athletic superstars such as Eddie Guerrero, Booker T, Chris Benoit, Chris Jericho, Rey Mysterio, Rob Van Dam, Jeff Hardy, and CM Punk to rise above the stigma that smaller wrestlers can't draw and earn their spot as true main eventers and world champions, and others like Matt Hardy, Gregory Helms, Shelton Benjamin, and Christian became cult favorites despite never quite making it to the top.

With The Rock and "Stone Cold" Steve Austin on their way out and Mick Foley settling into a part-time role, Triple H, Kurt Angle, and The Undertaker (who reverted back to being the Deadman) were the only main event players who held over to the new era, but also making his long awaited return to the ring was Shawn Michaels. Big Show and Kane largely settled into the upper mid-card afterwards but occasionally flirted with the main event scene. But it was also an era of elevation, as several midcard stars of the Attitude Era would become mainstays of the upper mid-card with the occasional main event run, like Chris Jericho, Chris Benoit, John "Bradshaw" Layfield, and Jeff Hardy. And one in particular became a true main-event player: Edge.

This was also the era that slowly legitimized women's wrestling in North America after so many years of glorified models competing in Catfights and Bra-and-Panties matches across most if not all North American promotions. Trish Stratus, Lita, and Torrie Wilson went from inexperienced valet managers to solid full-fledged competitors, while more experienced wrestlers such as Ivory, Jacqueline, Jazz, and Molly Holly helped carry them along while proving their own worth to the WWE audience. This era also saw the WWE debuts of several notable female wrestlers, such as Gail Kim, Melina, Mickie James, and Beth Phoenix.

The Ruthless Aggression era was not without its faults, however. From the tasteless "Katie Vick" necrophilia storyline, to Triple H's Reign of Terror on RAW, the decision to have him beat Booker T despite racist elements used in the build-up, to the WWE Diva Search bringing more untrained models to halt the progress of women's wrestling, to Muhammad Hassan's protest for equality quickly turning him into the stereotype that he said that he wasn't and getting him into hot water following the deadly terrorist bombings that hit London in July 2005, and the use of Rape as Drama, there were plenty of cons to go with the pros. Things started to take a dark turn in November 2005 when Guerrero died of heart failure brought on by years of drug abuse, leading to heavy criticism of the company’s drug policynote and Guerrero’s death being exploited to build several storylines afterwards, but even that pales in comparison to the infamous Pater Familicide and eventual suicide by Benoit in June of 2007, which is still the most infamous scandal in pro wrestling history more than a decade later. WWE would subsequently erase all mention of Benoit in their archives.

Following the Benoit tragedy, government and media scrutiny increased tenfold in response to the growing trend of injuries, addictions, and premature deaths among pro wrestlers. Thus, it became apparent to the higher ups that the Ruthless Aggression Era had ran its course. By mid-2008, WWE became Lighter and Softer in order to become family-friendly once again and mitigate injuries and drug abuse among wrestlers, hopefully preventing another Benoit situation from happening.note And to aid Linda McMahon in her Senate campaign, to no avail. Luckily for them, WWE had a kid-friendly star in John Cena who would carry them through a family-friendly era and would become their modern-day Hulk Hogan. Long-time wrestling fans have had varied reactions to this change, but it is begrudgingly agreed that it's for the best (at least in regards to a wrestler's well-being). The Ruthless Aggression era was just as ruthless as its name suggested, but a lot of fun as well. But as said before, fans now had to adapt to a PG rating.