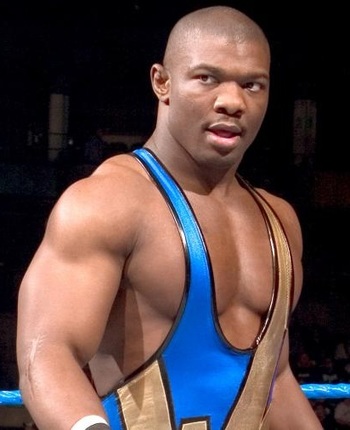 Shelton James Benjamin (born July 9, 1975) is an American professional wrestler who has wrestled for WWE, Ring of Honor (ROH) and New Japan Pro-Wrestling (NJPW); the latter under the name Shelton X Benjamin. Prior to becoming a professional wrestler, he was a two-sport athlete in college. Benjamin won an NJCAA championship in both track and field and collegiate wrestling.

Benjamin started his professional wrestling career in WWE's developmental territory Ohio Valley Wrestling (OVW), where he held the Southern Tag Team Championship four times with Brock Lesnar three times and Rodney Mack one time. WWE then moved him to the main roster in 2002 where he formed an alliance with Kurt Angle and Charlie Haas, first known as Team Angle and later The World's Greatest Tag Team with just Haas. During his tenure with the company, he won the Intercontinental Championship three times, the United States Championship once, and the WWE Tag Team Championship twice with Haas. He left WWE in 2010 for the independent circuit, before returning in 2017.