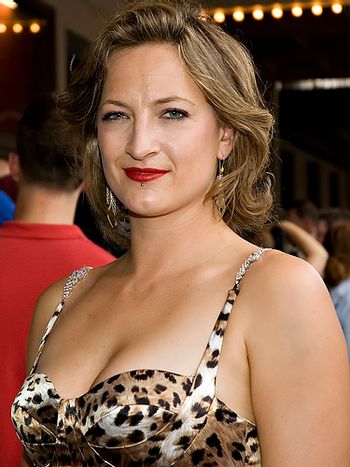 If they ever make that Thunder Cats movie, we have our Cheetara.
Advertisement:

Zoë E. Bell (born November 17, 1978 in Waiheke Island, New Zealand) is a stuntwoman, nicknamed "Zoe the Cat" (and, as you can see from the picture, that's not just because she's really agile) who has recently gained some clout as an actress thanks to Quentin Tarantino for casting her as herself in Death Proof. In her stunt career, she has doubled for such actresses as Lucy Lawless and Uma Thurman. Also, she starred in the internet miniseries Angel of Death, was stunt-coordinator (and had a blink-and-you-miss-it cameo) for the Russ Meyer Genre Throw Back Bitch Slap, and played a prominent (in more ways than one) role in Drew Barrymore's Whip It. She was also one of the two major focuses of the excellent documentary Double Dare (in which she jokingly refers to Lucy Lawless as her "acting double".)

Zoë Ball, on the other hand, is the morning DJ who took over the BBC's prestigious breakfast radio show from Chris Evans. She isn't renowned for being a stuntwoman. If you came here thinking "Bell" was a mis-print for the Zoe you wanted, this is the wrong page.