Yet Another Baby Panda 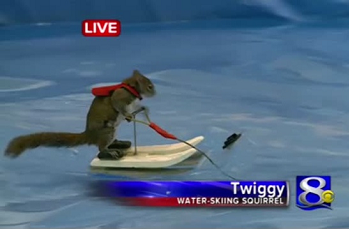 Animal segments will never Jump the Shark...
but the animals might.
"Still, on a gloomy Sunday morning, not a bad thing to finish on, pandas."
— Andrew Marr, The Andrew Marr Show
Advertisement:

Part of a News Broadcast, usually the last segment, in which lighthearted or heartwarming clips of stories involving footage of waterskiing budgies, squirrels adopted by mother dogs, cats rescued by firemen, firemen rescued by cats, or otherwise crowd-pleasing cute 'n' sappy animals are shown to boost ratings. In the event of a lack of fuzzy critters, the Special Olympics, the latest social media sensation or large litters of human babies can sometimes fill this role. Often (incorrectly) referred to as "Human Interest" stories, despite the general lack of anything interesting (or human).

In the news business, this segment is called the "kicker". Its sole purpose is time filler; it can be run if there's time left for it, or it can be dropped if the newscast is running long. It can cause some pretty rough Mood Whiplash depending on what else was in the show that day (you can immediately go from a horrific car accident that left 3 people dead to a cute story of a puppy with a bad leg getting a custom scooter to walk around in).

Compare with Worst News Judgment Ever, when the kicker preempts more serious news stories. Compare and contrast Film at 11, when a regular news story is teased as though it's a kicker.

In Britain, the practice is known as an "And finally", after the catchphrase of Trevor McDonald. An older in-house name for the practice named the newsroom comedy series Drop the Dead Donkey. ITV News At Ten went through a long period of ending on a cliffhanger story about a Spanish village ritual, where a live donkey was fated to be dropped from a very high church tower. The feelgood factor was engendered by the Spanish animal welfare people stepping in on behalf of the donkey, following sustained international condemnation.

If the story is literally a baby panda, it's also a case of Pandaing to the Audience. Compare to The Internet Is for Cats.

Contrast If It Bleeds, It Leads, which uses a gruesome sensationalized story to grab your attention.