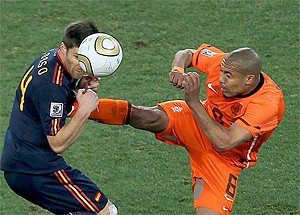 In many sports-related movies, in order to show how competitive and ruthless the Opposing Sports Team is, they will perform many aggressive actions (such as knocking opposing players down) that would never be performed in a real game because they would either result in a foul being called against the offending player or would serve no useful game purpose anyway. Of course, such a play that would normally call for the player's ejection will only result in a small infraction or no penalty at all, because the refs were paid off or not paying attention. Sometimes, the players don't actually want to do it, but are ordered to do so by their ruthless coaches.

Not necessarily a case of Artistic License – Sports, except in the cases where extreme roughness is tolerated well beyond what would result in ejections in Real Life.

To some, this is a complaint over real officiating and the belief (real or imagined) that star players and popular sports teams get favorable calls from game officials. That's a whole other discussion that will probably make a big mess and we'll just let you read the examples at the bottom of the page for that.

For people who use a sporting motif to beat people up, see I Know Madden Kombat. See also Rugby Is Slaughter and Hockey Fight. If this takes place in a tournament, including unnecessary roughness within the context of a fighting tournament, see Flexible Tourney Rules.

The Trope Namer for this trope is American Football, the only sport where the refs outright use this term (it's a catchall for rough play that isn't specifically banned but is clearly unfair). Other sports either use a different term or split it up into separate offenses.

Korra: I'll unnecessarily rough YOU up!