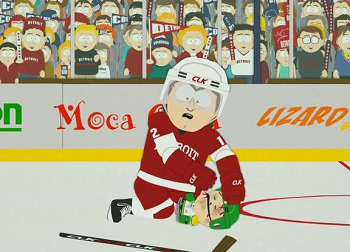 Detroit Red Wings vs. South Park Junior Hockey
"I went to a fight one night, and a hockey game broke out."
— Rodney Dangerfield
Advertisement:

A work of fiction involving the characters playing or attending a hockey game will see a fight break out. It's most commonly seen in Ice Hockey, to the point where that's all many people even know about hockey.

It's Truth in Television, but it's kind of a complicated trope. American works will tend to portray a hockey game as an excuse to find an opponent and beat the crap out of him without any real consequences for your team. Canadian portrayals, being very close to the sport, tend to show it for how Canadians see it: a very ritualistic aspect of the game, almost akin to an honour duel, where a team's designated "enforcer" stands up for his teammates by challenging anyone who takes liberties with them to some Good Old Fisticuffs.

Fighting is considered almost an anachronism in this day and age; it's tolerated at the absolute highest levels like the National Hockey League but considered unsportsmanlike at lower levels, especially in the youth ranks, where combatants can face expulsion and suspension. Works set in The '70s or The '80s are more likely to show hockey violence because fighting really was much more prevalent back then, including total melees involving everyone on both sides just punching each other.

The ritualistic aspect of hockey fighting is such that using any weapons such as your stick or skates is highly frowned upon — you can punch or grapple, and that's it. Combatants are expected to remove their gloves (which are not designed to cushion punches like boxing gloves) and fight bare-knuckled. Combatants are even often expected to remove their helmets, to allow your opponent to more easily punch you in the face. Even the technique is a ritual; because it's so difficult to keep your balance when fighting on skates, combatants tend to grab their opponent's jersey with one hand and punch with the other. The bare-knuckle aspect of it has led to the term "dropping the gloves" being a shorthand for fighting in hockey, and dramatically throwing them off your hands as you face your opponent is the hockey equivalent of Throwing Down the Gauntlet.

Compare Rugby Is Slaughter (a game where even playing properly leads to violence) and Football Hooligans (a game where the fans do all the fighting). Expect some Teeth Flying.

Springfield hockey fans didn't come to see Bart & Lisa have a tie and hug it out. They came for blood!

Springfield hockey fans didn't come to see Bart & Lisa have a tie and hug it out. They came for blood!