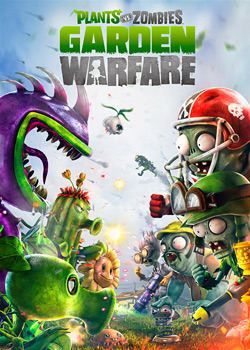 Shooters just got weird.
Spinning off of the Plants vs. Zombies series, Garden Warfare steps away from its Tower Defense roots to step into the realm of Third Person Hero Shooters. Players can take either side in a variety of modes, including:
Advertisement:

A sequel, Plants Vs Zombies Garden Warfare 2 was released on February 23rd, 2016. In this game, Suburbia has been taken over by the zombies and renamed "Zomburbia", and the plants are trying to take it back. In addition to adding 3 new classes for each side, the game also features a single-player campaign, a Hub Level full of side-quests and minigames, and a "Graveyard Ops" mode for Zombies.

In the summer of 2019, it was revealed that a reimagining of sorts of the franchise would be released sometime that year. It was officially announced as Plants vs. Zombies: Battle for Neighborville.

Example of:
Character in the Logo