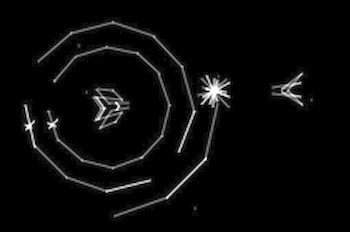 Mr. Player, tear down this wall!
"The EYE is protecting Exor!!"
— Super Mario RPG, informing us why we can't hit the boss's weak spot yet
Advertisement:

A type of Video Game boss whose weak point is protected from your attacks by some kind of regenerative shielding or armor that you must destroy before he'll take any actual damage.

We use the term "shielding" loosely here: In most cases it really is literal shielding or armor plating, but the concept can extend to almost anything the boss uses to block, deflect, or otherwise nullify your attacks.

Unlike the Tactical Suicide Boss, you cannot simply dodge and evade the boss's attack patterns until he leaves you an opportunity to strike. Nor can you depend on something within the room to give you an opening either. Violence Is the Only Option when facing a Shielded Core Boss — you must actively attack and destroy this shielding to expose his weak point, then attack again to damage his Life Meter before he can put the shielding back up. Expect to have to take out his shielding multiple times throughout the battle before he is finally defeated.

Some of these bosses can be very difficult, depending on how much damage their shielding can sustain before it is disabled, and how quickly the boss regenerates it. In some extreme cases, damaged (but not destroyed) shielding may even regenerate on its own, requiring the player to not only inflict damage to disable it, but to inflict damage quickly and continuously. On the other hand, some are simply tedious if destroying his shield takes a long time and he doesn't otherwise pose much of a threat; in many such cases a player may opt to take some damage if it means getting some extra hits on the core while it's exposed. The core, once exposed, may also surprise players by lashing out with the boss's most powerful attack.

Distantly related to the Puzzle Boss, since the boss cannot be damaged directly as long as his shielding is in effect; but where a Puzzle Boss will rely on some other, indirect means to take him out, here you must attack the boss just the same.

If the armor does not regenerate throughout the battle, the boss merely has Destructible Armor (and will very likely Turn Red once his armor is destroyed), and a savvy player can use it to calculate their progress towards defeating the boss.

See also Flunky Boss, where the boss is protected by independent Mooks, who may need to be destroyed before you can engage the boss directly; Cores-and-Turrets Boss, in which the boss's presence is reduced to its (no pun intended) core elements — something that attacks you, and something for you to attack — and Broken Armor Boss Battle, where physical armor needs to be shucked off of a boss before any damage can be dealt.

A core with orbiting shields around it to negate damage.

A core with orbiting shields around it to negate damage.