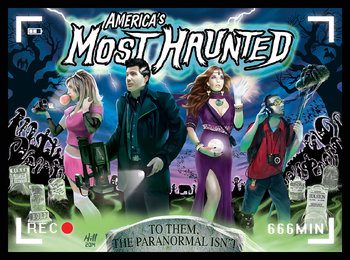 What happens when a podcast and pinball love each other very much...
"To Them, The Paranormal Isn't."
Advertisement:

Pinball themes have been inspired from all kinds of topics and all sorts of genres, from science fiction and fantasy through sports and movies and all points in between. Yet even in this broad field, America's Most Haunted is unique for being the first pinball game inspired by a podcast.

The genesis of this game came when Charlie Emery, creator and host of the Spooky Pinball podcast,

became inspired to develop a game combining Emery's love of pinball and all things paranormal. Emery, in turn, was inspired to start his own company to manufacture and sell it to collectors of boutique pinballs.

The game itself is about the wacky antics of four amateur Reality Show ghost hunters as they search for evidence of ghosts in various haunted venues. Visit places like the Abandoned Hospital, the Historic Theater, and the Haunted Bar, take photos of sneaky spectres, consult the Spirit Guide, then Complete Investigations for a chance to battle the six different Ghost Bosses. While the Ghost Minion on the playfield follows your ball, jump across the Theater Balcony, push open the Morgue Door, manipulate the haunted Hellivator to summon the Hotel Ghost, then use the high-tech and psychic powers of your team to clear each haunt. Color-changing LEDs and over a thousand comical quips keep things lively, but only the best will be able to Battle the Demon behind all the haunted happenings.

After two years of development, a name change (the original name was "Ghost Squad"), and lots of good-spirited help from industry veterans and pinball fans, America's Most Haunted was released in 2014 as the first game from Spooky Pinball LLC, in both "Animated Blue" and "Reality Green" art packages. A complete run of 150 units has been filled, with games shipped to buyers through 2016. The game software is also fully open sourced, allowing budding developers to update the software and animation simply by swapping out an SD card.

A gameplay video can be seen here.