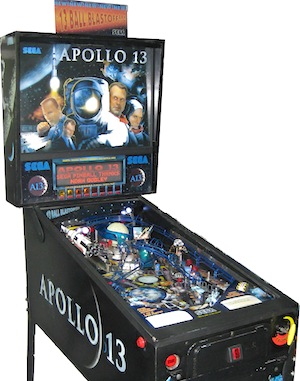 Apollo 13 is a 1995 pinball game designed by Joe Balcer and Joe Kaminkow, released by Sega Pinball, based on the film of the same name. Kevin Bacon (Jack Swigert), Bill Paxton (Fred Haise), and Gary Sinise (Ken Mattingly) provided custom speech for this game.

This is a very dense pinball table; playfield toys include an elevating Saturn V rocket, a lunar LEM module, a countdown LED, and a rotating Moon. Collect orbits around the table to Advance the Spacecraft around the Moon and return to Earth, and perform various Apollo Missions along the way — perform a manual burn to straighten the orbiter, fix the Life Support systems, fix the CO2 scrubbers, and take care of the Master Alarm. For more points, shoot the Saturn and load up for multiball, or use gravitynote or a magnet to slingshot pinballs over the Moon. Even with all these features, the biggest appeal of the game is its 13 Ball Blastoff Multiball, where thirteen balls are unloaded onto the playfield. Up to six people can play at once, either individually or in teams, and the game offers "Novice" and "Wizard" difficulty settings for players.

Not surprisingly, Apollo 13 is considered a gimmick table, with the Saturn V rocket, pinball-grabbing Moon, and thirteen-ball multiball entertaining for the first few times. Afterwards, players tend to be divided, with supporters who find it a well-balanced game for beginners and novices, and detractors who bemoan the lack of satisfying shots or a deeper challenge. If nothing else, it's worth a few plays just for the experience.