Pinball / Asteroid Annie and the Aliens 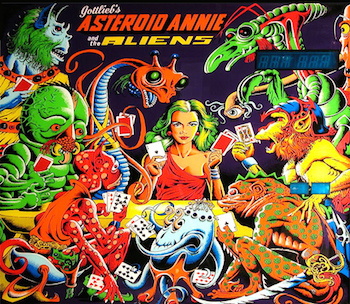 So a human walks into an Alien Bad-Guy Bar...
Advertisement:

Asteroid Annie and the Aliens is a 1980 Gottlieb arcade pinball game designed by John Buras and illustrated by Gordon Morison. The game is as straightforward as the name — Token Human Annie is playing poker against her alien companions, and she needs your help to assemble a winning hand. Use the rollovers to select a suit, then hit the various drop targets to collect tens, Jacks, Queens, Kings, and Aces. Collect extra balls along the way so Annie can keep taking her martian marks to the cleaners.

Compared to other pinball games of the time, Asteroid Annie is a low-budget throwback, verging on Retraux — it is a one-player game, with a single level, no multiball, no bonus multipliers, and no jackpots. The game was created strictly as an economical way for Gottlieb to use up various legacy parts and controllers, and only 211 tables were made. Even so, it's become a Cult Classic among fans of Gottlieb electro-mechnical games; the clean layout and simple rules belie some very difficult shots that challenge even veteran players. Annie was also the final pinball game drawn by Gordon Morison, and the incredibly detailed and gorgeous artwork is considered a fitting Grand Finale to his career.

Asteroid Annie and the Aliens demonstrates the following tropes: