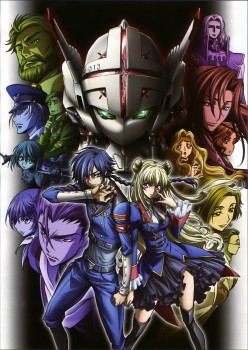 "More importantly, Akito; why do you fight? You have no family to protect, no country to fight for... you're alone. Why are you living?"
"So I can die."
Advertisement:

Code Geass: Akito the Exiled is a Spin-Off OVA from its parent Code Geass. The first of five episodes premiered on August 4, 2012 in Japanese theatres, with the last released on February 6, 2016. The story takes place between Code Geass and Code Geass: R2, focusing on the events that occurred in Europe in the year a.t.b 2017, after the defeat of Zero's Black Rebellion.

The European Union, one of the three major powers in the Code Geass world, has been steadily losing ground in their war against the expansionist Holy Britannian Empire. Leila Malcal, a European noblewoman and military strategist, decides to form a new military unit codenamed "W-0", comprised of volunteers from Area 11 who have sought refuge in Europe. Her intention is to give the former Japanese a place to belong, but because they are seen as expendable by the general public due to their ethnicity, W-0 is only used in the most dangerous military operations with the worst chances of survival.

After a particularly disastrous operation, a young soldier named Akito Hyuga is the only survivor of W-0. The story follows both him and Leila as they fight for the European Union, seeking to make sense out of the war and achieve their own goals and dreams.

Characters can be found on the Code Geass character sheet.