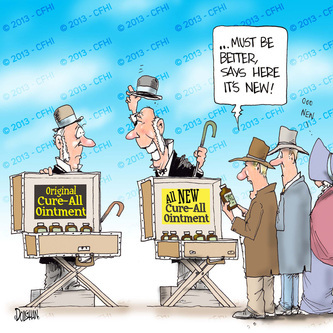 Leonard: I guess it couldn't kill us to meet some new people.
Sheldon: Actually, it could kill us. They could be murderers or the carriers of unusual pathogens.
— The Big Bang Theory
Advertisement:

is a logical fallacy where someone claims that a proposal, idea, work, or trend is better or more accurate than what came before, solely because it is newer or more recent.

This argument is often made with regard to technology, where it is often supposed that anything "high tech" is automatically better than anything "low tech." However, technology is all about fulfiling requirements, not just improvement for the sake of improvement — while a modern tank is faster and has a much more powerful gun than a World War I tank, it has inferior obstacle crossing abilities because its design represents a trade-off between visibility and obstacle crossing, and therefore claiming the modern tank is "better" is subject to conditions.

This fallacy is the polar opposite of Appeal to Tradition; C. S. Lewis called this fallacy chronological snobbery. Calling goodness "old-fashioned" is an insult because of this trope. It is also known as "Appeal to Youth."

In some forms of media, Appeal to Novelty occurs when a new work includes an original feature solely in an attempt to attract an audience by appealing to their curiosity. Note that in this use, appealing to novelty is not inherently "right" or "wrong;" the novelty might end up actually attracting an audience, drawing lots of imitators in the process, eventually resulting in the original being Vindicated by History.

Also see New and Improved and "Seinfeld" Is Unfunny.